Director and Past President (2008) 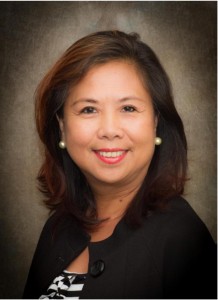 Edith Manalang Andres of Anaheim is graduate of Mass Communication with major in Broadcast Communication from the University of the Philippines, and attended Ateneo University for her Masters in Business Administration. She works as a correspondent of Balita Media, Inc. in pursuit of her discipline in communication. Aside from being a homehealth entrepreneur for more than 10 years, her other interests include directing live concerts and Broadway musical presentations. She directed the first-ever Filipino opera in English, Karim at Jasmin of composer/medical practitioner Ramon Geluz, which premiered in Long Beach, Los Angeles and Las Vegas. She was the founder and administrator for Family Home Care, a health care facility for the elderly in Anaheim. Her recent venture included extending the scope of services to the client’s own home through her Family Care Homes Services which she put up recently in answer to the increasing demand for health care services. Ms. Andres has served the Filipino American Chamber of Commerce of Orange County as a board member for the past six years and was its president for 2008-2009. She was FACCOC’s “Person of the Year” and was recognized so together with other honorees at the 2012 Remarkable Women of Orange County Awards Rites of the National Association of Women Business Owners-OC Chapter at the Costa Mesa Hilton recently. She also co-founded and served as president of LA-based Philippines Press Club International (PPCI). She was the Public Relations Officer of the Philippines Society of East Los Angeles. She is a newly minted member of the Santa Ana North Rotary Club and is also actively involved in the Couples and Women’s Ministries of her church.